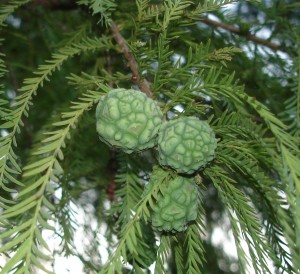 Flowers and Fruit: Non-flowering. Strobili mature in 12 months, produced in late fall with pollination in early winter. Seed cones globular, 15-35 mm in diamater, brownish-purple, solitary or in small clusters, on the ends of previous year’s twigs.

Water Use: Not drought tolerant.

Other Features: Trunks are buttressed (flared or fluted) at the base, and when growing in water, often develop distinctive, knobby root growths (“knees”) which protrude above the water surface around the tree. Can survive catastrophic weather events due to high stability.